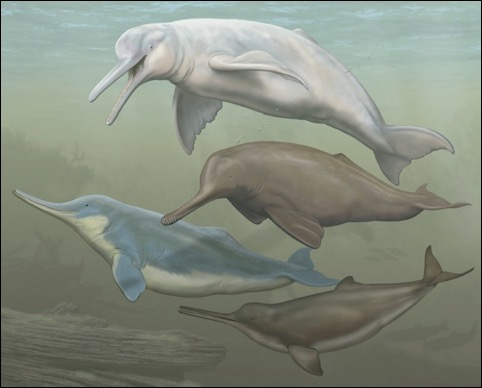 You may have heard of freshwater sharks, but what about freshwater cetaceans? Pods of gregarious white belugas leave the ocean and move up large rivers (e.g. St. Lawrence River) in the summer months to feed on fish and benthic invertebrates. However, these beautiful whales are only temporary visitors to riverine environments. River dolphins are the true freshwater cetaceans.

What continues to puzzle scientists is the far-flung distribution of river dolphins. How did they come to inhabit these distant rivers. A partial answer to this puzzle appears in a recent paper on cetacean phylogeny (Geisler et al. 2011). While this paper presents a detailed phylogeny for all Cetacea based on a combination of genomic, morphological, and fossil data (Figure 2), it also uses this phylogeny to provide preliminary tests of some of the hypotheses of river dolphin evolution. 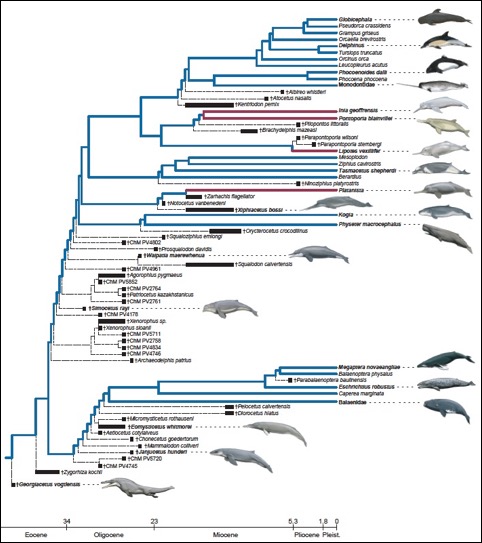 Figure 2. Phylogenetic hypothesis of the Cetacea based on a supermatric of genomic, morphological, and paleontological data. Lineages that connect extant taxa are colored blue. River dolphin lineages are red, and fossil lineages are indicated by dotted lines and black bars. (From Geisler et al., 2011)

One explanation is that the ancestors of living river dolphins were coastal marine species that were stranded in far-flung river systems as Cenozoic sea levels dropped. This hypothesis suggests that tolerance of freshwater (and intolerance of saltwater) evolved at least three times. The data presented by Geisler et al., 2011 support this view.

Characters such as numerous teeth, long narrow rostrums, and elongate mandibular symphyses were thought to be convergent adaptations allowing efficient prey capture in riverine systems (i.e. raptorial feeding). However, the authors point out that, “there is no reason to think raptorial feeding is more efficient in rivers than in the ocean.” Furthermore, placing these morphological characters on the consensus tree, which includes fossil species, reveals that the paleoenvironments of extinct river dolphins were likely marine (Figure 3). For example, the fossil species ancestral to living Platanista and the ancestors of both Lipotes andInia were marine forms. These fossils already had long mandibular symphyses and other characters considered part of the raptorial suite. Thus, it is unlikely that the anatomical traits associated with prey capture in river dolphins are adaptations to freshwater environments.

Figure 3. The evolution of shared morphological traits linked to prey capture in river dolphins. Five characters are mapped onto the parsimony supermatrix tree (A) and the ML/Bayesian constrained tree (B). Changes to the character states are marked by colored bars on the lineage branches. Marine (blue background) versus riverine (brown background) habitat also is optimized onto the two trees. (From Geisler et al., 2011)

Rather than being convergent adaptations to raptorial feeding in freshwater, the supermatrix phylogeny provided by Geisler and colleagues (2011) reveals that many of the morphological characters shared by extant river dolphins were already present in their marine ancestors prior to entry into freshwater environments.